If I can stop one heart from breaking, I shall not live in vain.

Emily Dickinson and her Poems 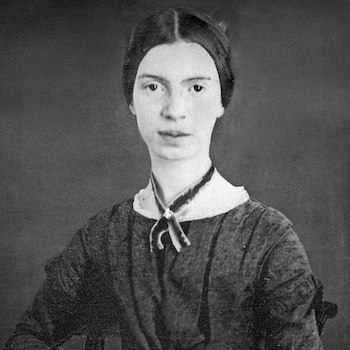 Emily Dickinson was a 19th century poet from Amherst, Massachusetts. She was born into an affluent and successful family, but chose to live her life largely in the seclusion of her family home. Her introspective curiosity blended with literary and religious influences to create a large body of poetry throughout her lifetime.

Dickinson used poetry and letter writing as her creative vehicle, and formed decades long relationships with several individuals that would receive not only personal correspondence but also poetry. In many cases her poems read as confessions of her psyche. She blended multiple poetic forms to create a style that was impressively original.

Because Dickinson's work was extremely personal it seems she found her greatest influence in memories recounted. This introspection was heavily influenced by her Calvinist faith. Though Dickinson never underwent the conversion that is typical of Calvinists she did incorporate many facets of the religion into her interpretation of the world.

Dickinson's four-line stanzas and meter were inspired by religious hymns and psalms. Within this format she excelled at modifying the stanzas to include her own rhythmic pauses. She was capable of compressing a great deal of meaning into a small word count. The result is a unique but undoubtedly legitimate poetic style that has influenced generations of writers.

Despite using her own personal experiences as a basis for her work Dickinson was able to relate them in a universally accessible tone. Readers feel she describes their mental state as well as her own. Her poetry often reads like it is her stream of consciousness, but she spent time editing and refining her work as well. The work is not organized to be part of any philosophical school of thought, and instead reads as a natural interpretation of her own feelings.

Only ten of Dickinson's poems were published during her lifetime and she left no clear indication of what she hoped to achieve by writing. She secretly organized 1800 poems found after her death. It is probable she intended them to be published posthumously because of the diligence she put into both producing and preserving her poetry. Many poems were sent to pen-pals accompanying letters, but Dickinson also put work into alternate endings and stanzas that were found.

In her poem I taste a liquor never brewed Dickinson's ecstatic disregard for rhyme and grammar is evident. She shows her delight in the beauty of the outdoors through vivid imagery, and also comments on choosing a life as an outsider. This is a common theme in Dickinson's work and she often rejoices in her self-imposed isolation. One of her most famous pieces entitled I'm Nobody! Who are you? is a more direct example of her preference for solitude. What is more impressive is her ability to include her reader and justify the validity of their solitude as well.

Dickinson wrote in a keen observational tone and sought to describe the intangible elements of life. The lines between mortality and the afterlife were commonly explored. In Because I could not stop for Death, Dickinson describes the grim reaper in a melancholy yet romantic fashion. She does not express fear at the concept of death, but instead seems to meditate on the theme. Her description of the afterlife is concise and hopeful for the reader.

In many ways Dickinson seemed to have longed for death. It seems clear that she suffered from some variety of mental illness. It is also speculated she may have had epilepsy in addition to an anxiety disorder. In her poem I felt a Funeral, in my Brain, she imagines traveling from the mortal plain to one far beyond. She ends the poem with a trademark ambiguity leaving the reader to wonder which reality would be preferable.

Though Dickinson led a solitary existence she seemed to have experienced enough romantic stimulation to inspire a life's worth of poetry. Her pen pal and posthumous editor Thomas Wentworth Higginson was wary of including poems such as Wild nights-Wild nights! in the first collection of her poetry that was published after her death. He imagined Dickinson as a "virginal recluse" and feared readers would read the poem in a way she had not intended.

Higginson seemed convinced of Dickinson's virginity. He was either unaware or doubtful that the poet had been seen sitting in the lap of Judge Otis Lord. Lord also inspired Dickinson to write that she rejoiced in loving him. This is only one example of Dickinson's possible romances and indeed one that came after she wrote Wild Nights, but it illustrates Dickinson did have the capacity for romantic interaction. She also wrote of an individual she called "Master" frequently and expressed great affection for a few female friends.

Since her death readers and historians have had no choice but to speculate why Dickinson did not share more of her poetry with the world during her lifetime. She seemed to have had a fairly confident perception of her abilities as a poet, and had received praise from friends and fellow authors. It has been recorded that her father for whom she had great affection disdained female scholars. It could be that Dickinson perceived that any success she earned as a poet would upset her father. She wrote frequently about fame in poems such as Success is counted sweetest which was published anonymously in her lifetime.

Since the nineteenth century, American poetry has developed in two main streams; the first began with the free, pulsating, incantatory verse of Walt Whitman, while the second started with the experiment and innovation of Emily Dickinson. Dickinson's poems have been published posthumously in several collections and have garnered critical praise. She was successful in creating a widely accessible and universally appreciated body of work. Her talent was not widely known during her lifetime, but her legacy will live on forever.